When Erik the Red – popularly credited as the first European to discover Greenland in year 982 – first set sail west, his final goodbye to the European shores was likely releasing the mooring lines. Just like his forefathers before him he would have relied on lines to keep his longship tethered to shore.

Fast forward a thousand years, and the same technology is still in use. In fact, it is probably one of the technologies that has changed the least since it was first invented. While sails have been replaced by thrusters and messaging pigeons by 5G, mooring lines are still used with ever-larger, ever more advanced vessels.

Why fix what isn’t broken, you might ask? Disregarding that wheels have turned out rather useful even if sleds were still doing the job, mooring lines are not only antiquated but also one of the biggest risks to the health and safety of maritime workers. The P&I Club reports that mooring incidents, such as seafarers standing in bights or snap-back zones when ropes part, are one of the most common causes of injury. On top of the capriciousness of the ropes or hawsers themselves, every minute spent mooring is also one more minute when longshoremen need to perform strenuous manual labour right next to the water – literally putting their life on the line.

While mooring appears frozen in time, the shipping industry has moved on. We are now dealing with ultra-large container vessels that are more than 400m in length and can carry more than 20’000 containers. Bulk carriers are the size of several football pitches and haul hundreds of thousands of tonnes of cargo. Out of 47 new cruise ships planned for launch by the end of 2021, 38 will be over 100,000 tonnes.

There is an alternative – the MoorMaster experience

So, since every minute matters, how do you put time on your side and bring mooring into the 21st century? Drumroll... MoorMaster vacuum mooring.

Put simply, a MoorMaster system consists of one or several robotic arms moving a vacuum pad. At the push of a button, the arms reach out past the fenders and press the vacuum pads against the vessel hull to establish a vacuum couple. This process only takes some 30 seconds. After mooring, MoorMaster keeps the vessel from moving away from or along the berth but lets the vessel float freely vertically with draft or tide changes. Since MoorMaster only needs a flat piece of hull to attach to, it works for virtually all vessels with no expensive and time-consuming modifications.

Some 20 years ago the first commercial MoorMaster system entered operations, thereby allowing our first customer to transcend mooring lines. Today, almost a hundred MoorMaster systems transform the operations of ports worldwide across a large range of applications. For example, MoorMaster is used to eliminate surge motion for 400m container vessels and save energy for some 60 electrical ferries. Thanks to MoorMaster systems installed in 15 locks across the US and Canada, ships can sail from the Atlantic Ocean all the way to the Great Lakes without ever putting out a mooring line.

At Cavotec, we are very proud of every system we have delivered, but, by and large, most ships are still moored with mooring lines. There are many reasons for this – including a conservative industry – but one contributing factor is our existing products: historically MoorMaster units have been too big to fit on most quays.

This is why I am now so excited to launch the next generation vacuum mooring technology: MoorMaster NxG. Over the last year, we have used every minute of data from 20 years’ service to redesign MoorMaster from the ground up, to deliver smarter installation, operation, and maintenance, thereby allowing easy introduction into thousands of ports worldwide.

I am so impressed by the ingenuity of my engineering colleagues who developed a breakthrough new mechanism which reduces MoorMaster NxG’s depth on the quay by 40% versus our current products. Finally, we have an answer when ports worldwide ask for a solution to keep their people safe and the world’s cargo moving.

Save time, money, and the environment

It is widely recognised that the shipping industry produces large amounts of pollutants – not just carbon dioxide, but other toxins and acidic compounds. Shipping is one of the least carbon-intensive ways of moving cargo per tonne-kilometre, but since most vessels burn some of the dirtiest fuels available, they spew out tonnes of emissions that are directly harmful to humans.

Growing understanding of the impact of these pollutants is fuelling worldwide investments in shore power technology allowing the vessels to shut off their engines while at berth. As an example, Port of Long Beach and Port of Los Angeles’s investment in shore power and other sustainable technologies have cut diesel particulates by some 87% since 2005, thereby achieving a similar reduction in related cancer risks around the San Pedro Bay.

This leaves the residual problem of ships’ emissions when entering and leaving port. Although some port facilities are now built some distance away from major urban centres, many ports still expose nearby communities, not to mention port workers.

One of the main benefits of fast mooring is reduced cruising speeds to the next port, saving fuel and slowing global warming. More importantly, mooring in 30 seconds reduces emissions during mooring in port by up to 98%, saving human lives. Reduced idling, thruster use and tugboat use decrease emissions in port, keeping NOx, SOx and particulate matter to a minimum.

What truly warms my heart is that the maritime industry is not content to gradually reduce emissions from the current fleet. Across the world we see shipping companies introducing zero emission horizons with 2050 being a common target date. What I find even more inspiring is that some parts of the industry are committed to achieving even more ambitious goals in a fraction of the time:

ASKO Maritime, the shipping arm of Norway’s largest grocer, is already launching the world’s first fully electric, fully autonomous shipping fleet. The vessels will enter commercial operation in the Oslo Fjord at the beginning of 2022 and will replace 2 million kilometres of truck transport, saving 5,000 tonnes of CO2 every year.

I am incredibly proud that MoorMaster NxG will play an important part in this maritime supply chain of the future. In each port, ASKO Maritime is introducing MoorMaster NxG to quickly moor the vessels. This saves enormous amounts of energy since they can immediately shut down their powerful thrusters when arriving in port and still keep humans out of harm’s way.

In another 20 years, I am convinced we will look back at this year and see an inflection point in the maritime industry: the beginning of a safer, cleaner, and more efficient world where autonomous ships and zero emission transport became a reality. So, while the mooring lines served our forefathers well, and likely were a great help to Erik the Red in Greenland, we now need to move on in order to make our land more green again.

Cavotec, the world’s leading manufacturer of connection and electrification solutions for ports, airports, and a wide variety of industrial applications, will open a new innovation centre in the Netherlands at the beginning of 2021.

In mid-2021, transport and logistics provider, SeaRoad, will be the first to put the next generation Cavotec vacuum mooring technology, MoorMaster NxG, into commercial operation. The new NxG units will be integrated with SeaRoad’s original MoorMaster systems installed in 2003.

Maritime industry under pressure on emissions

One of the world’s most conservative sectors is now witnessing a fundamental shift as efforts are made to transform its environmental footprint under intense pressure from its stakeholders. Across the maritime industry – typically slow to change – steps are being taken to reduce emissions and operate more sustainably, with the ultimate goal of achieving zero emissions.

In recent weeks, ports around the world have been hit by delays and backlogs caused by factors including a surge in demand, a lack of empty containers, and the coronavirus – the latter manifesting as mass quarantining, social distancing, illness, and lockdowns. In the UK, these issues were compounded by fears of a no-deal Brexit. 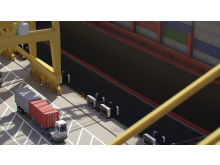 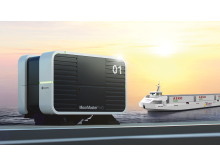 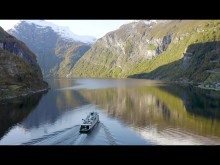 When you’re keeping the world moving, every minute matters. This is why the new MoorMaster NxG still cuts mooring times to seconds, but n... 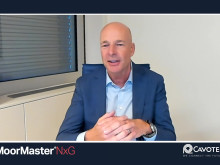 Cavotec launches the next...