Both awards are in recognition of the technical characteristics and operational benefits of the MoorMaster application at the Utah Point iron ore berth at Port Hedland in Western Australia.

The technology dramatically improves safety and operational efficiency, and also enables ports to make infrastructure savings. It has performed more than 40,000 mooring operations at ferry, bulk handling, Ro-Ro, container and lock applications around the world.

“MoorMaster™ is increasingly accepted by the industry as the safest and most effective way of mooring ships. We are delighted that this genuinely innovative technology has been recognised by these two awards,” notes Cavotec CEO, Ottonel Popesco.

The PHPA and Pinc Group’s Utah Point Multi-User Bulk Export Facility project won the Western Australian Engineering Excellence Awards’ Resource Development Category. This achievement highlights the engineering and environmental challenges successfully tackled by the team at the Utah Point berth. MoorMaster™ formed one of the elements of the entry that went into making it a success against competition from larger, more established rivals.

The team’s success in the Western Australia awards ensures the project will be in the running for Australia’s National Engineering Excellence Awards the results of which will be announced at a ceremony on November 23 in the Australian capital, Canberra.

The Resource Development Category includes the mining, agriculture, processing, oil and gas, solar energy, wind and waterpower sectors, or any engineering project associated with the development and, or processing of minerals or natural resources.

The PHPA contracted Cavotec to design and test 14 entirely new MM200 MoorMaster™ units capable of handling the large tidal ranges experienced at Port Hedland. Following the units’ manufacture and successful testing, they went into service in 2010.

The second award was the Australia Bulk Handling Award for Occupational Health & Safety (OH&S) that recognises “the implementation of ergonomic or risk management practices and policies to enhance the safety and health of employees and/or the general public. Or for a product or technology that enhances OH&S.”

The Awards include categories such as Bulk Handling Facility of the Year, Innovative Technology, Dust Control Technology, Environmental Project of the Year, Excellence in Transport and Conveying Technology. In the Best Practice in OH&S category, Cavotec faced rivals such as   ESS, Laing O’Rourke, Sinclair Knight Merz (SKM), Tunra Bulk Solids.

The safety benefits and efficiencies generated by MoorMaster™ have driven interest in the technology from other operators at Port Hedland and around the world. For example, Fortescue Metals Group recently ordered 24 MoorMaster™ automated mooring units – one of the largest orders to date for the system – for the Anderson Point 4 (AP4) berth, also at Port Hedland. Earlier in the year, Cavotec won a major order for the technology at a container handling port in the Mediterranean.

The technology is also being employed at other bulk handling applications in Western Australia. Earlier this year, Karara Mining ordered 12 MoorMaster™ units, for use at their dedicated bulk handling facility at the Port of Geraldton. Eight such units are also in the final stages of commissioning for Hamersley Iron, a subsidiary of Anglo-Australian mining group Rio Tinto, at the Dampier Fuel Supply Wharf in the Port of Dampier.

Cavotec is a leading global engineering group, developing innovative technologies that enable the maritime, airports, mining and tunnelling, and general industry sectors to operate more sustainably. To find out more about Cavotec, visit our website at www.cavotec.com. For updates on Cavotec projects, technologies and industry news, take a look at our blog, or follow us on Facebook or Twitter. 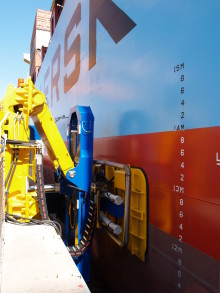 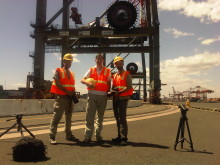 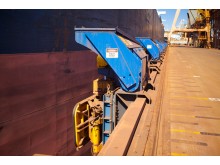 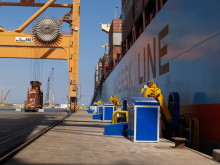 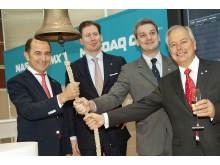 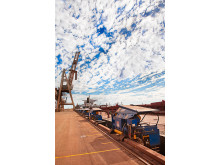 Mooring out of this world...

An extraordinary shot taken at Utah Point berth, Port Hedland in Western Australia in June 2011 during a trip to shoot material for our n...