The quarter was characterised by the award of a number of significant projects, including the largest order to date for MoorMaster™ and some significant orders for aircraft ground support equipment, while day-to-day activity declined as some of Cavotec's niche markets contracted. Consequently, the Group's order book reached a record level of EUR 106,535 thousands, albeit with an increased weight of longer lead-time orders.

In addition, Cavotec INET and Cavotec Dabico will this November move to a larger and more modern joint facility, further capitalising on existing synergies and marking a turning point in Cavotec's overall operations on the US West Coast.

Margins improved quarter-on-quarter by 0.8%, but fell short of 2013 targets and will not meet the 2012 profitability levels. Management continues to focus on strengthening margins despite a subdued level of day-to-day business, and is confident to achieve significant improvements within 2014.

The Ports & Maritime market unit (MU) continued to register substantial growth in the period, with revenues for the period amounting to EUR 22,282 thousands, an increase of 14.4 per cent compared to the same period last year.

Order intake remained strong with a number of smaller projects but also an order for the Group's largest MoorMaster™ project to date worth some EUR 10 million.

The unit also reported a major order for its Panzerbelt crane cable protection system for a customer in Qatar. This project is the latest in a series of projects in a long lasting cooperation at this application.

Elsewhere, the Ports & Maritime MU won an important order for power and spreader cable reels for container cranes that will be used at a port in Turkey. This order was won by Cavotec India, and in addition to reinforcing the Group's relationship with India's only container crane manufacturer, more broadly it also highlights the Cavotec's growing presence in this burgeoning market.

The Airport's MU results for the quarter were stable, with revenue reaching EUR 12,602 thousands. In another example of Cavotec's expanding position in India, in this instance with its Airports MU, the Group won two orders for defence applications in Pune and New Delhi.

The performance of Cavotec's Mining & Tunnelling unit continued to be affected by widespread caution in these sectors. Revenue decreased to EUR 6,621 thousands compared to EUR 9,473 thousands in the same quarter last year. It should be noted however that Cavotec continues to be a key systems supplier to a large number of customers in a wide variety of territories.

Similarly, the General Industry MU reported a softening in revenues to EUR 10,386 thousands, up 4.4 per cent compared to the same period last year. However, as indicated in previous reports, and as continued to be the case in the period, this MU registered growing demand for its innovative systems in niche and expanding segments such as vehicle charging and offshore energy.

Taking into account recent market developments, FY13 is expected to have revenues of approximately EUR 230 million, while order intake will be substantially stronger than FY12. Management expects this softening trend in revenues to extend into the beginning of next year. However, recent market activity already indicates a return to an increased rate of growth in 2H14.

Building on their already solid track record growth opportunities for the Group will come from core innovations such as MoorMaster™, which stands to continue to build on the string of orders seen so far in 2013. Other innovations including Alternative Maritime Power, Human Operator Interface (HOI) technology and Electric Vehicles (EV) also stand to gain further traction in coming quarters.

Looking at the outlook for specific MUs: for Ports & Maritime growth will continue to be impacted by the slow-down in the growth rate of containerisation.

However, ports and shipping lines continue to drive forward with automation, electrification and productivity enhancing projects, resulting in consistent demand for the Group's product offering. Continued focus on environmental and efficiency drivers will provide interesting opportunities for Cavotec's innovative technologies.

On-going investments to increase productivity and sustainability at airports throughout the BRIC and ME regions will continue to drive demand for the Group's ground support equipment offering.

Management foresees capital expenditure by large mining companies will continue to decline over the coming quarters, impacting demand for the Group's product offering for Mining & Tunnelling. This trend is likely to continue until commodity prices rebound. It should be noted however, that this trend is expected to bottom-out by 2H14.

The General Industry MU will continue to register solid day-to-day business, with growth coming from new innovations and further penetration of the defence, EV and other developing sectors.

In conclusion, Cavotec's long-term growth story continues to be based on sound foundations despite possible short-term speed bumps, as shown by the ability to navigate turbulent economic tides while capitalising on new opportunities. Management reiterates its commitment to the communicated long-term targets to be achieved over the next business cycle.

Activity remained very strong in Europe & Africa with order intake reaching EUR 61,671 in the quarter compared to EUR 42,138 thousands in 3Q12. Revenues saw a modest decline to EUR 38,634 thousands thereby affecting the operating result, which decreased to EUR 3,932 thousands compared to EUR 5,464 in same quarter of 2012. The order book reached a new high at EUR 82,312 thousands thanks to three MoorMaster orders registered this year.

In line with the previous year the Middle East & India region's operating result broke even in the third quarter. Order intake was subdued in the quarter influenced by the postponement of some large projects in the Airport MU but with a growing contribution from India, where order intake doubled compared to the same period of the previous year.

The Americas continued to be influenced by the on-going restructuring at Cavotec INET with operating result showing a loss of EUR 2,679 thousands (3Q12 loss of 1,487), despite revenues increasing by 9.1% quarter on quarter. Order intake was significantly lower at EUR 5,374 thousands compared to EUR 13,163 thousands in 3Q12.

The Far East was the strongest performing region in the quarter with revenues increasing to EUR 15,396 thousands, an increase of 112% compared to the previous year (7,277), fuelled by the completion of several projects in the Ports & Maritime MU. Consequently operating result increased significantly to a record EUR 3,071 thousands compared to EUR 472 thousands in 3Q12.

In terms of revenues and operating result the slowdown in the mining sector continued to have a knock-on effect on the Australasia region. Despite this there continue to be other opportunities in the region for our other Market Units and in particular for the Airport MU where we have witnessed an increase of activity compared to the previous year.

Revenues were unchanged compared to 3Q12, mainly due to no large projects being completed in the quarter. Operating result increased with EUR 453 thousands in the quarter thanks to the growing contribution of our engineering services component.

Income tax had a positive effect for the quarter due to a significant amount of quarterly profit coming from low tax regions and the recognition of deferred tax assets.

9M13 revenues hit another Cavotec record, amounting to EUR 172,485 thousands. Organic growth was 14.6%, while the exchange rate fluctuation had a negative effect of -2.4%. Operating result amounted to EUR 10,294 thousands, a decrease of EUR 464 thousands compared to 9M12. As already informed in the 2Q13 report, this decrease mainly comes from the first quarter's product mix, which was negatively impacted by the completion of certain strategic contracts in the Airports MU and the on-going restructuring costs of Cavotec INET operations.

Financial items were lower compared to the previous year benefitting from less negative exchange rate fluctuations. Tax rate decreased from 31.0% to 15.1% as an effect of higher profit in low tax regions. As a consequence, net profit amounted to EUR 7,956 thousands, up 27.6% compared to 9M12.

Operating cash flow was positive at EUR 1,747 thousands in the quarter. The capital reduction of EUR 2,918 thousands and the deferred portion of Combibox were paid in 3Q13, while investing activities were kept at a very low level, EUR 366 thousands compared to 5,498 thousands in 3Q12.

In the third quarter 10 new persons were employed ending 9M13 with 955 full time equivalent employees, compared to 898 in 9M12.

For the full 3Q13 report please go to http://investor.cavotec.com/results.cfm&nbsp; 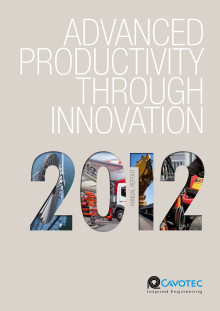