3Q12 was a strong quarter for Cavotec in which, contrary to prevailing market conditions,our Order Intake increased by 14.7%, of which 4.1% was organic growth. Revenues for the quarter increased by 13%, while our book-to-bill ratio remained above 1 with the Order Book increasing quarter-on-quarter by 6.1% to EUR 106,735.

Day-to-day business was good throughout the quarter with significant increases in revenues registered by most of our Market Units (MUs). Our Ports & Maritime MU was the strongest performer, exemplified by a significant order for Alternative Maritime Power reeling systems in Southeast Asia, posting an increase in revenues of 38.2% compared to 3Q11.

Activities in the mining sector also continued to grow, for instance in the USA with an order for explosion-proof RRCs for land-based drilling rigs, with Cavotec's Mining & Tunnelling unit registering an increase in revenues of 28% compared to the same period last year.

In line with an overall softening in the sector, the Group's General Industry MU reported lower revenues compared to 3Q11, despite a partial offset from the increase in volume from new business areas within the sector.

In light of Cavotec's 3Q12 results and the strong performance expected for the next quarter, underpinned by the completion of the MoorMaster™ automated mooring project in Pilbara, Australia and our strong Order Book, I feel confident upgrading expected FY12 revenues to the top end of our previously communicated guidance, which means an increase of between 13% to 15% compared to FY11 revenues.

Despite this, the Group cannot ignore the political and economic headwinds currently facing the world and the uncertainty they bring. Economic conditions throughout a large part of the world remain challenging and we continue to see the impact of these trends in varying degrees within Cavotec's MUs. These macro-economic developments are in part mitigated by the positive signals received from within our niche markets, leading the Group to adopt a cautiously optimistic posture for the coming period.

I would also like to highlight that strengthening and consolidating the various segments of an expanding organisation such as Cavotec requires a dedicated level of investment. We are on the right track with the on-going integration processes for INET and CombiBox, and I am confident we will see their respective contributions to Group results increase in the coming months.

Our intrinsic strength as a company lies in our global team, our managers and employees whose flexibility and resourcefulness in responding to rapidly shifting realities in the marketplace have ensured the continued success of the Group. I can assure you the entire team at Cavotec is focused on bringing 2012 to a successful close as the best year in our history.

The Americas registered a strong performance in 3Q12 with revenues rising 31.1% to EUR 10,092 thousands while for 9M12 the region saw an even more significant increase, supported by the full consolidation of Inet operations, with revenues rising by 87.8% to EUR 28,102 thousands. Order Book for the region is strong at EUR 24,085 thousands, up 30.8% compared to 9M11 and with a book to bill ratio at 1.2.

The Middle East & India region registered a slightly weaker performance compared to the same period last year, continuing the trend noted in 2Q12 and mainly due to a lack of large-scale projects. Despite this, continued cost control measures and steady day-to-day business ensured gross operating results coming in at break-even. Order intake for the region in 3Q12 increased significantly by 185.1% compared to the same period last year. This increase was mainly thanks to the MoorMaster™ order registered in July and a positive trend in day-today business.

Far East continued to grow steadily in 3Q12 posting a 22.4% increase in revenues, while order intake increased by 56.5% compared to 3Q11. Due to the on-going process of building up local manufacturing capacity at our Shanghai facility, the gross operating result for the region does not show a commensurate growth pattern for the period. 9M12 revenues amounted to EUR 19,650 thousands, up 22.9% while the gross operating result amounted to EUR 1,700 thousands, which is in line with 9M11 result. Order book stands at EUR 28,231 thousands, an increase of 27.4% compared to 9M11 with a book to bill ratio of 1.6.

Financial items were higher compared to the same period last year due to negative exchange fluctuation, which was only partly offset by lower interest expenses. Net profit reached EUR 1,336 thousands compared to EUR 2,310 thousands in 3Q11, down 42.1%.

Operating cash flow for the quarter amounted to EUR 6,866, compared to 11,007 in 3Q11. Year to date, operating cash flow totalled EUR 9,815 thousands, in line with 9M11 (9,944). Financial activities amounted to EUR 6,546, up significantly from 2,544 in 9M11, mainly due to increased borrowing net of payment of capital reduction. Cash flow from investing activities was negative at EUR 10,980 thousands due to investments in the expansion of the manufacturing facilities and the acquisition of CombiBox.

For the full 3Q12 Report please download it from: http://investor.cavotec.com/results.cfm

Dates when Cavotec will issue financial information in 2013.

The Board of Directors of the Cavotec engineering group is pleased to announce the acquisition of aircraft ground support equipment (GSE) manufacturer Combibox Systems Scandinavia AB, which in 2011 had revenues of approximately EUR 2 million. The acquistion made on 3 September 2012 is set to further strengthen the Group’s product offering and customer base in the global airports sector. 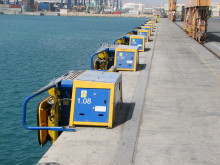 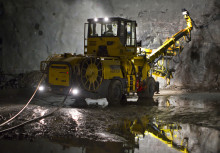 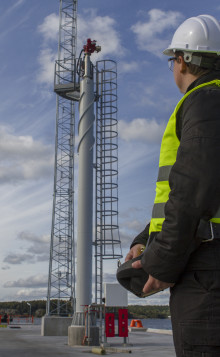 In another example of how our radio remote control (RRC) systems are used at some unusual applications around the world, one such unit recently entered service with two huge water cannon at Petroport in Stenungsund, southern Sweden. 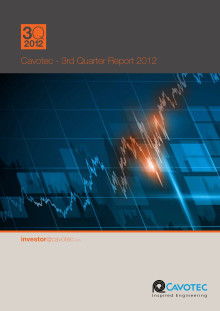 A summary of Cavotec’s third quarter report and background materials.