In the second quarter demand remained robust for Cavotec products and systems in all four of the Group's market units (MUs) and in the majority of regions.

Order intake was strong at EUR 104,760 thousands in the first half of the year, and revenues reached a record level of EUR 101,282 thousands, an increase of 21% compared to the first six months of 2011. Importantly, Cavotec was able to maintain the positive developments seen in 1Q12 as book-to-bill ratio remained above 1, while Order Book increased by EUR 5,553 thousands to EUR 100,595 thousands, a 5.8% increase compared to the end of 2011.

Similar to 1Q12 this second quarter also saw strong growth in day-to-day orders, without any large project orders being registered. This underlines once again the intrinsic strength of the Cavotec Group to book excellent results on purely day-to-day business.

Nonetheless, there were some particular highlights for this period, including significant orders for shore power systems for the Port of Oakland and the Port of Long Beach. Meanwhile, for the Airports Market Unit, of particular note were orders confirming the Group's growing positions in key markets such as India, China and the United States. Further details on these projects are included in the respective MU sections of this report.

As highlighted in Cavotec's 1Q12 Report, one of the Group's main goals for 2012 is to strengthen its level of profitability compared to 2011. At this halfway point in the year, I am pleased to report that we are well on target to achieve this objective.

Without doubt, the on-going global economic uncertainty remains a concern, and with potential slow-downs in some markets, Cavotec continues to be vigilant and versatile in safeguarding continued success. Over the years the Group has a proven track record of being able to weather downturns in good condition, and with Cavotec's 2Q12 results extending the positive trend established in 1Q12, I remain confident that the Group is well placed to maximise its growth potential in the months ahead.

The Americas recorded the largest revenue increase of all regions for the period, EUR 18,010 thousands up 148% compared to 1H11. Although partly influenced by the acquisition of INET, the region saw very strong organic growth at 63%. Order intake amounted to EUR 21,916 thousands in 1H12, up 103%, to which Cavotec INET US Inc. contributed EUR 1,920 thousands.

Europe & Africa had an extremely strong first half of 2012 with an increase in gross operating result of 113% compared to 1H11. Revenues amounted to EUR 79,195 thousands, compared to EUR 63,239 thousands in 1H11. Northern Europe was a main contributor to these results thanks to the booming offshore market. Order intake remained strong with a book-to-bill ratio of 1.08.

In line with expectations, and mainly due to the absence of large projects in 1H12, the Middle East & India region registered a weaker performance compared to 1H11. Thanks to on-going day-to-day business and prudent cost control, gross operating results came in at breakeven.

2Q12 revenues for Australasia amounted to EUR 5,987 thousands, an increase of 35% compared to 2Q11. Despite a slightly softer 1H12 result, the region stands to develop well in the second half as MoorMaster™ automated mooring units will start to be shipped for existing orders in Australia.

Net profit in 2Q12 increased by 41% to EUR 3,825 thousands, compared to EUR 2,709 thousands in 2Q11. This was in part due to positive exchange rate fluctuations and the lowering of net interest expenses. The tax rate increased in 2Q12 to 31% versus 22% in 2Q11, due to lower contributions from low tax countries.

Operating margins grew substantially in 1H12 to 8.1%, compared to 7.5% 1H11 and 6.7% FY11. This growth was achieved in the face of an increase in raw material costs, and supported by significantly higher volumes and on-going monitoring of operating expenses. Operating result increased 23% to EUR 9,980 thousands (1H11: 8,107).

Operating cash flow reached EUR 2.948 thousands in 1H12 (1H11: -1,063). 2Q12 operating cash flow was negative at EUR 1,801 thousands, primarily due to inventory run up for several large projects due for completion in the second half of the year. 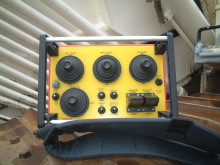 Following yesterday's release of our interim report, today we have news of an important order on the US market for our advanced, explosion proof radio remote control units for a niche onshore energy application.

The Board of Directors of the Cavotec engineering group is pleased to announce the acquisition of aircraft ground support equipment (GSE) manufacturer Combibox Systems Scandinavia AB, which in 2011 had revenues of approximately EUR 2 million. The acquistion made on 3 September 2012 is set to further strengthen the Group’s product offering and customer base in the global airports sector.

The Board of Directors of Cavotec SA has initiated an investigation, which is currently underway, focusing on certain practices of two individuals at Cavotec's US-based INET operations. 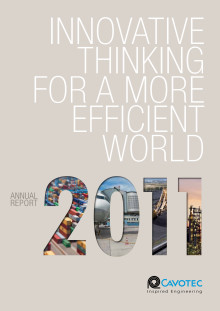 With our share listing moving to Sweden from New Zealand, and our acquisition of leading airport ground services provider INET, 2011 was an especially seminal year in the Cavotec's development. Our Annual Report 2011 describes these events and details the performance of our Ports & Maritime, Airports, Mining & Tunnelling, General Industry market units and the Group as a whole.